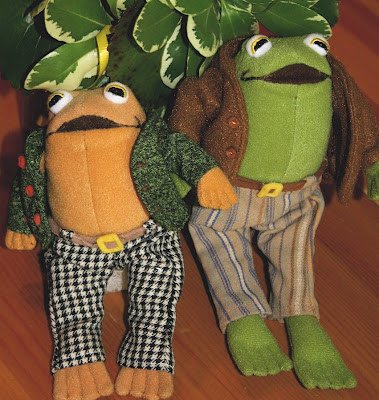 Frog and Toad stayed on the island
all afternoon, they ate wet sandwiches
without iced tea.
They were two close friends sitting alone together.

This is one of my favorite quotes, lines rather, from a favorite story. A very simple story, Alone, one of the many Frog and  Toad stories written by Arnold Lobel. As they find themselves in various situations and predicaments, Frog and Toad delight children and impart profoundly simple wisdom about the necessity, commitment and significance of friendship to adults reading the stories to children.

I missed out on Lobel’s stories the first time around; most were written in the 1970s, a decade after my easy-reader days. But twenty years later, my childhood best friend, who worked in children’s publishing and television in California sent me Days with Frog and Toad, the book and cassette tape.

I tucked them away for the time when we had children, five years later, in 1995. Then on one of the many sleepless nights I sat rocking my weeks-old son in the nursery and talking with my husband, who had stretched out on the floor. We were both trying to outlast the robo-baby who, aside from stray naps, stayed awake nearly around the clock.

I’d come across the tape and he  put it in and as we listened I began to giggle, then laugh until nearly hysterical; I recognized the deceptive simplicity of the author’s wit in the antics, adventures and ordinary moments shared by best friends, which was, of course, why Karen had sent them. Frog and Toad reminded her of us: they boosted each other’s morale, celebrated special occasions, played tricks and labored over decisions, shared secrets and burdens and stuck together. They were there for each other no matter what.

Frog and Toad were much like we’d been, first surviving adolescence and boys, learning to shave our legs and wear makeup; writing poetry, playing music and making art, weathering heartbreak, school and then work, long distance moves, marriage and having children, creating a lifetime of memories.

Just over two weeks ago, I received a box from Karen, still my best friend, who recently moved back to California; I miss her terribly in spite of frequent phone calls and emails. She warned me more than once not to touch it, not even a moment early. So, I dutifully waited until my birthday, this past Thursday, and much to my surprise and delight, inside were Frog and Toad, together, stuffed and smiling, dressed in their smart jackets and slacks, with a message: “To my favorite Frog from your favorite Toad.”

I held them up and my kids cheered – they know the stories. I couldn’t decide whether to laugh or cry. This is also the fortieth anniversary of  the beginning of our friendship, years before Lobel published the first of his Caldecott Honor-winning books. It’s hard to comprehend the scope and depth of a relationship nearly as old as we are, all the crazy things we’ve done, ways we’ve found to make life a bit easier, more fun and a whole lot more meaningful for each other.

Karen Mireau, Founder of Bio.Graphia said…
To know the heart of another is the greatest gift I can imagine. When I read this, I cried the wettest, most spontaneous tears of my life. It made me consider how it is we truly connect with people, how we get past our often camouflaged and "froggy" exteriors. When we really see another person, it's as if there is a satori -- a sudden clarity -- and our essential natures are understood. The love and light that is experienced at that moment is felt as a sense of peace and and safety and rightness. This is what occurred with Patti and I, the very instant we met as young girls, just beginning to understand who we were as women, as artists. The rest is history -- 40 years of it! All relationships should have to pass the "Frog and Toad" test -- a true standard of goodness, indeed! Thank you, Patti, for this beautiful tribute to love and friendship!
June 1, 2008 at 12:31 PM

Ragamuffin Gal said…
Patti,
This was such a delightful post and I enjoyed viewing the two friends that go with the book. I am a 1st grade teacher who reads Frog and Toad with my class! Thanks for sharing your lovely take on this friendship tale!
June 15, 2008 at 11:18 PM

Brittany Vock said…
This is beautiful! Is there anyway that I could get the pattern that your friend used? I have a God brother who is 5 years old and is in love with Frog and Toad. I would love to make these for him but I am a novice and sewing and I don't think I could do it without a pattern. Visit me at my site- hestiasdisciple.blogspot.com. Thank you so much for this beautiful post.
June 1, 2010 at 12:56 AM

Popular posts from this blog

One World One Heart

When I started this blog in the spring of 2008, I wondered who would read it... and why? Did I have anything to say that would be of interest or invoke a reaction? Offer hope, inspiration, a laugh, maybe the realization that someone else really does know how you feel? Little did I know that I would meet such an incredible wealth of amazing, warm, welcoming creatives, some of whom have become very close friends. I don't like to imagine life without them. I visit some artists who post new work nearly every day. Wow, how I wish. Then there are those, like me, who try to post weekly in the hopes that friends and a few new readers will keep showing up. I get personal and often deviate from art, technique, workshops and such; I guess that comes from being a lifelong writer. There is the occasional trip to the soapbox, dealing with a chronic illness, raising kids, rationalizing the creative endeavors that supersede chores on the to-do list, a bit of poetry... One of the most popular p
Read more 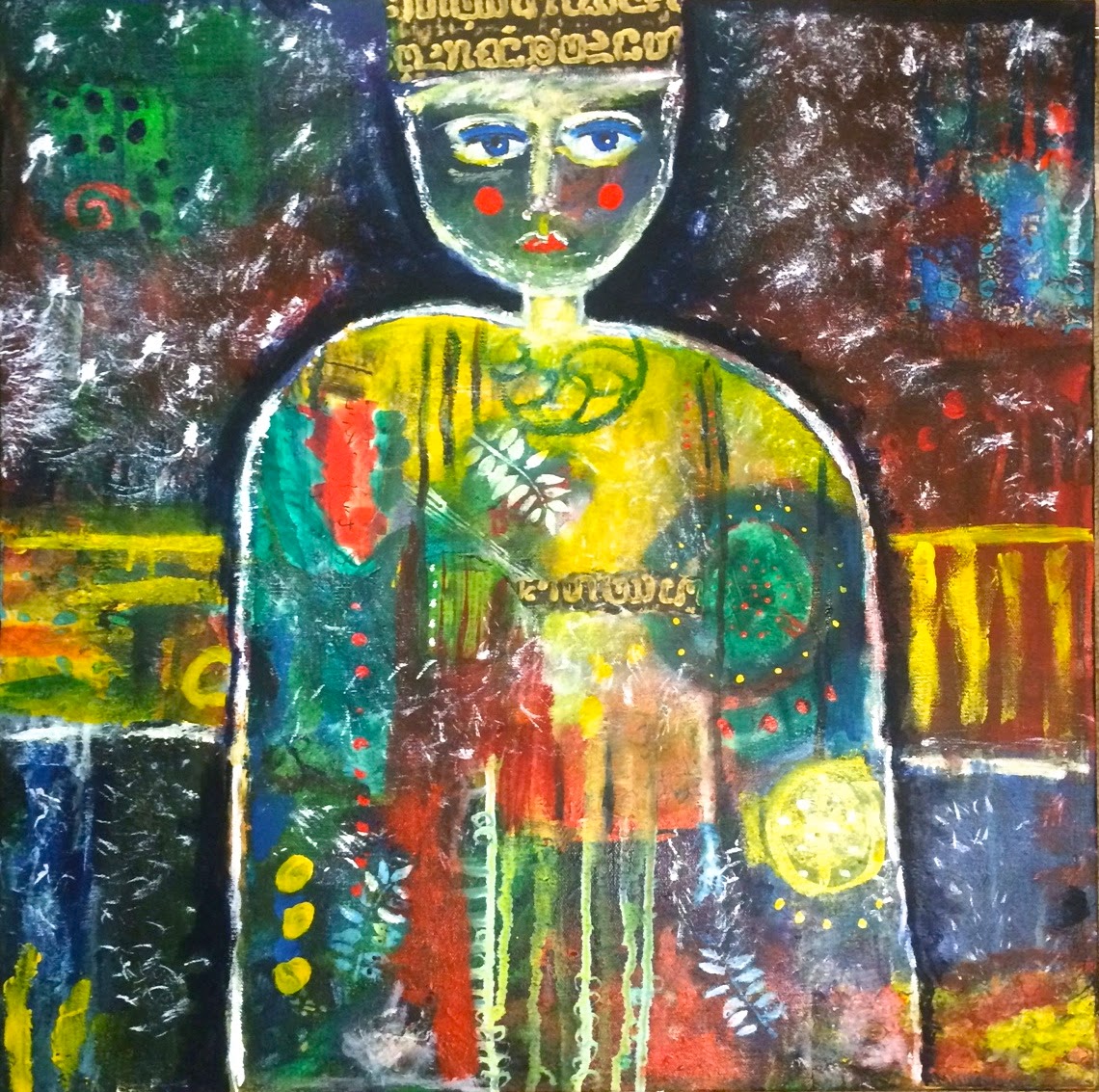 Warrior? Egyptian Princess? Just plain bizarre? Whatever she appears to be she is close to my heart, one of my most favorite paintings. Adding new techniques, taking workshops and painting every day is the way we grow as artists. My path certainly isn't linear, sometimes it feels like going off on a tangent, then making a sharp right, kind of like those molecular drawings without the science, or the lines connecting them. It is great fun to let go and see what comes of the next, brief stop along the journey. While having a blast, I do feel like my work is all over the place. My BFF Rachel , and my artist-husband, Jim assure me there is a commonality among the diversity.  That makes me happy, though I don't always recognize it. I wonder, how winding has your path been, is there a theme to your body of work, or several over time? So many artist I admire greatly produce fabulous works that aren't at all similar yet I can usually spot the signature, the one a
Read more